*This is a compilation of the last two weeks 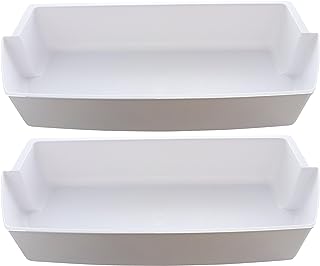 I have had the same side by side refrigerator for the past 13 years and I love it. However, one by one the shelves on the refrigerator side have cracked and broken until I have been down to just two workable door shelves (there was a third one, but it was being held together with duct tape and it recently bit the dust) Instead of replacing the whole thing, I decided to see if there were any replacement parts available online. The first couple of sites wanted $50 for each shelf! Before giving up I checked on Amazon to see if they had better deals….surprise, surprise…they did. Amazon was selling a two pack of shelves compatible with my fridge for just $15, so I grabbed four new shelves for just $30. To say I was excited would be an understatement, I squealed when they came in the mail last week. So the moral of the story is do not spend 2 years of your life limping by with half broken shelving when Amazon probably has everything you need just one click away.

My daughter was in a production of The Princess and the Pea at our homeschool co-op this past week and needed a medieval type dress for her role as a lady in waiting. Luckily I had a pattern that I picked up a few years ago at Hobby Lobby so we just needed the fabric. I found a nice selection of cotton fabric at Walmart for just $3 a yard, so I only spent around $15 on the entire dress. **I also picked up a yard of white fabric a few days later to make a small apron for an additional role she was in for just $3 as well. I think both items turned out pretty well if you do not look too closely!

I decided to order my daughter’s math curriculum for next year before the buying rush begins. I found a student edition and more importantly the teacher’s edition of a geometry textbook package on Amazon for just $35. **If you have to teach high school math make sure you get the teacher’s edition…trust me. We prefer public school math textbooks for high school, so for the past few years we have been buying used California textbooks on Amazon (which seem a little more advanced than our state’s current math curriculum for some reason)

I noticed about a month ago that I had not been charged for my gym membership for the past two months on my credit card statement. I have tried to get it fixed for the past three weeks and finally last week, the manager figured out what the issue was. I told him that I understood if they needed to charge me for the past two months, but he said it was a problem on their end, so no need to worry about it. That was so nice!

We bought new tires from our car dealership last October and decided to get the warranty that they offered at the time. For the past few months, my tire pressure light has came on every few weeks, so when I took the car in for its oil change I had the mechanic look for a leak (apparently we had picked up a small nail somewhere) But thanks to our warranty, we were able to have the hole patched and rotate all the tires for free as well.