We lucked out and had a few cloudy days this week, so our walks were at least a little cooler than normal, but the humidity is still awful….but another 10 miles down so yay! 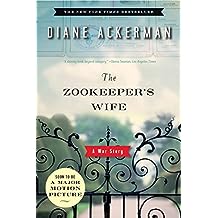 I knocked this goal out early this month. I found two really great books about WWII to read this week. The first one (my favorite of the two) was called The Nazi Officer’s Wife.  The title really says it all, this book is about a Jewish woman who pretends to be a German and actually ends up marrying a Nazi officer!  I have read a lot of true accounts of WWII and I always learn something new from each book I read. I learned in this book that Jews who pretended to be non-Jews were called U-boats and that the amount of rations they received from the Germans were based on if you were a German, non-German, or a Jew. **No surprise the Jews were allotted the least. I think the book said that the Germans were allotted 2,000 calories a day, Poles were allotted 1,400 calories a day, and the Jews were allotted 600 calories a day.  This book was really well-written and reads almost as a fiction novel, instead of the non-fiction account it is.

The second book I read was called The Zookeeper’s Wife.  This story is about a family that hides Jews and fugitives from the Nazis in their family-owned zoo.  In this book, I learned that the Russians could have pushed the Germans out of Poland earlier during the war, but they wanted more Polish resistance fighters to die first, so that Russia could occupy Poland after the war. I also learned that the Germans tied women and children to their tanks to keep sharpshooters from trying to blowup the tanks.  This book read more like a history book that was interspersed with stories the family shared about their lives during the war, but still it was really an enjoyable read.

One down and one to go

5. Have two date nights each month

We went out for sushi and browsed through a local bookstore for our date night this week.

6. Add twelve new products to my Teachers pay Teachers store (4 down and 8 to go)

I am working on a reading guide for Snow Treasure still and hopefully will finish it this week.

8. Buy nothing new this year

Nothing new was bought this week…except for the multitudes of socks and underwear that we bought during our Back to School Tax-Free weekend.  **Luckily, I include underwear as one of the exceptions to my “buy nothing new challenge”, so its all good:)

This week I bought beans and rice to donate to the local foodbank.

How are you doing on your goals??